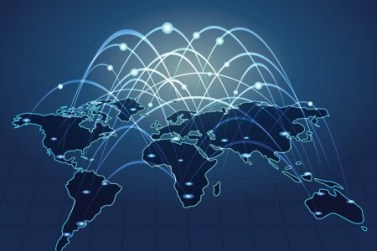 An internet map. If my father was alive today he would be over the moon about the internet. According to the old Los Angeles California Eagle newspaper Eddie said it “was thrilling to talk to people all over the world”, and he said this way back in 1946 when asked about his hobby ham radio.

This is an example of a ham radio set-up. Eddie had one in our basement on 2nd Avenue in Los Angeles in the 40s. When Eddie and my mom “motored” across the U.S. Eddie could also broadcast from his automobile. Mom said that he spent a lot of time in that basement talking to people from all walks of life. Eddie’s call letters were W2AKM. He got his ham radio license in 1925. A newspaper reporter saw his set-up at home and called it a private radio station!

With the advent of the Radio Act of 1912, the first Amateur Radio License was issued. Applicants were required to demonstrate technical expertise in adjusting and operating equipment, and a knowledge of International Conventions and US laws . The code requirement was ability to transmit and receive in the Continental Morse at least 10 words per minute and recognize important signal usage of the day (distress and “keep out” signals). By 1936 Eddie was one of 51,000 amateur ham radio operators.

By 1939 Eddie had a ham radio set-up at this theater, the Broadhurst on 44th Street in New York where he was performing as KoKo, The High Executioneer in Mike Todd’s Hot Mikado, as well as a set-up in his apartment at 120 W. 138th Street in New York (W2AKM—Edward Green, 120 W. 138 St., N. Y. City. Radio Amateur Call Book Magazine). During this same time the 1939 World’s Fair was happening and Eddie spent a lot of time commuting between Harlem and Flushing Meadows just so he could spend time at the communications exhibits. I read that he had been cited by the government for his work with ham radio, and had written a few articles, but I could not find any actual corroboration.

Eddie continued this hobby until his passing in 1950. By the time he was doing Amos n Andy shows he would communicate with Freeman Gosden (Amos) in Beverly Hills, another ham operator, with engineers at NBC and with others around the country. I imagine he would be happy to know that according to an estimate made in 2011 by the American Radio Relay League, two million people throughout the world are regularly involved with amateur radio. This is not a good picture but I put it in because Eddie’s call letters for his station are the teeny pin on his lapel in the bottom right hand corner.

The internet would blow him away.

Thanks, for stopping by. And don’t forget to “Like” my page mentioned below.