During the process of researching information on my father’s life for the biography I have written, I began to realize that not only would I learn interesting facts about my father during this research but that I would also learn new and interesting facts about those with whom he worked. As this writing process went on I found that the more I discovered, the more I discovered. And somehow the discoveries made in the latter part of my research matched up with the earlier discoveries.

For instance, in a 1940 Baltimore newspaper article, my father says that an important point in the making of any motion picture, but particularly in photographing Black actors, is an experienced cameraman, because of the wide variety of skin colors and tints to be found in the Black race. The article noted that Eddie said the cameraman he used most of the time was Dan Malcomes, a veteran when it comes to cameras.

In order to use this information in my book I began to research Dan Malcomes. I started this research in 2014. In 2015 I learned that a Don Malkames had worked as a cameraman back in 1939 for a Mr. Joseph Seiden of Seiden Cinema, located in Fort Lee, New Jersey, which is where movie-making was done before there was Hollywood. Mr. Malkames was the cinematographer on the movie Paradise In Harlem (1939) which was directed by Joseph Seiden.

My father, Eddie, also made a movie  that year (wrote, directed, produced and starred in) titled What Goes Up, in his movie studio in Fort Lee, New Jersey, Sepia Art Pictures.   Through more research I discovered that the cameraman that Eddie worked with for his promotional photos was in fact, Don Malkames, miss-printed in the newspaper as Dan Malcomes. A search on the Internet today will show a listing of the different spelling versions.

That What Goes Up has not been found is unfortunate too, because in 2015 as some of you may know from an earlier post, I received an email from the granddaughter of a woman who was an actress in the movie. The actress’s name is Millicent Roberts and she is now ninety-nine years of age. She is one of the ladies who was picked up by a chauffer and driven to the set in New Jersey to rehearse and perform her part as “little miss fresh mouth.” She told her granddaughter that she remembers the White cameraman who took her promotional bathing suit pictures on the set. (Eddie’s movie set was all-black except for Don, on purpose.) Millicent says that the pictures “were glamourous, just like Hollywood photos.”

The one thing that Millicent, who lives on the East Coast, would like is to see the movie What Goes Up again. A few of our friends are endeavoring to discover the whereabouts of the physical copy of this movie.  Maybe you beautiful people out there could keep an eye out, also. The movie premiered at the Apollo in New York in 1939.

Millicent has seen the photographs that were taken of her but was never given copies. Thanks to the internet I found out Mr. Malkames’ relative Rick Malkames has followed in Don’s footsteps and currently is head of The Malkames Collection.  I was able to send an email but they have nothing in their archives.

Now that I have written Eddie’s biography, Millicent’s granddaughter has bought the book and reads portions of the book to her. She says her grandmother “is just beside herself(lol!!!)”.

I am going to end with this quote from Millicent’s granddaughter in regard to the book because I never expected to receive such a powerful response or such a wonderful compliment. Very positive!

“It (the book) is also an inside look at the resilience and fortitude of our brothers (Black Men) like Eddie -who were clearly brilliant, talented, and resourceful in a time when we (Blacks) were considered to be nothing of the sort! This book should be required reading in African American History courses in every College and University!”

I’m so excited, and I just can’t hide it
I’m about to lose control and I think I like it!

Hi, there!  I have been working diligently on the biography of my father, Eddie Green, for the past couple of weeks, because I am so close to finishing and I want to get the manuscript sent out for proofreading before I send it to a publisher. One year ago I bought my first laptop and started this project. AND THEN, last week, out of the blue, I received a message from a lady whose 90-plus year old Grandmother, whose name is Millicent, had been in one of the movies my father directed, produced and starred in, “What Goes Up.” The movie was made in Fort Lee, New Jersey in 1939.

Evidently, Millicent had for years been telling  the younger members of her family about those days, but no one really listened until one family member decided to investigate. She went on line and found my blog (yay!) after typing in Eddie’s name, and now I get to add a bit more information to my book, and I get to share a little of Millicent’s story (she played a chorus girl in the movie) with my readers. This is exactly the type of thing I wanted to happen, though I wasn’t sure it would. 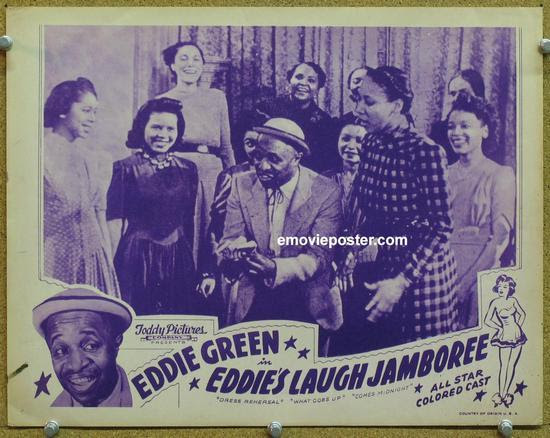 Millicent is the shorter woman in the front in the black dress.  I have had a copy of this photo for a long time, but had no idea who these women were. Now I know one of them.  Millicent and I live in different cities and have never met, but, boy, am I glad her relative found me.  (Laugh Jamboree was a Toddy Pictures production, though the movies, Dress Rehearsal, What Goes Up and Comes Midnight, were Eddie’s.)

Through her granddaughter, Millicent has provided me with more insight into Eddie as an entertainer and as a movie producer than she will ever know.  For instance, she says that Eddie was “all business”.  Well, in a Baltimore Newspaper article from around the same time that Millicent knew Eddie, the headline reads: ” As a Comedian, He’s Very Funny, As a Business Man, He’s Very Sensible and Comedy is a Business.” The article goes on to say “The fact that Eddie is so funny on the screen, stage and radio is due to the highly intelligent and efficient manner in which he conducts his work.”

The other thing about this contact with Millicent, is that, had my mother, Norma, still been alive today, she would have been 92 years old. For those that don’t know Eddie married my mom when he was 54 and mom was 22. So Millicent was a cast member in Eddie’s movie, about the same time Eddie first met my mom.  I love Millicent, I don’t know her, but that’s ok. I have a few more tidbits to share (Millicent was a beauty contest winner), but I will save them for another post.

Being able  to look back and “experience” the past through my book and this blog, brings me so much joy.  I mean, just because its 2015 does not mean past times are inconsequential. Past times, older people,  are extremely important to who we have become today, and well worth the attention, in my opinion.

And, thank you, for stopping by.

Lyrics for “I’m So Excited” courtesy of The Pointer Sisters