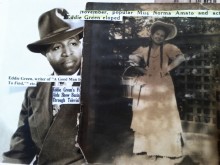 This is going to either make me or break me. Which is really not the point here. The point is to show the necessity of yesterday. (thanks, Ben)

Last month a new CD dropped featuring old time black-face cartoon figures. And they were featured in a purposely seemingly demeaning way. The song seems to say that the Black person’s role (even the more affluent Black person) today is not much different than it was then, in some people’s eyes. Seems pessimistic to me. The song went Platinum in a week. One week.

The book I have written about my father has been a hard sell to some Blacks today because of the era in which my father lived. Some people do not see, and do not want to see, the relevance of yesterday’s all-black cast movies or old time radio, or vaudeville as it applies to progress. As for myself, I understand. Seeing my father in blackface has taken some getting used to. It’s still kind of embarrassing to admit my father was a blackface comedian. And if I am embarrassed what do I expect from others?

As you can see in the photo “From Broadway to Okeh”, Eddie performed In Connie’s Hot Chocolates as a blackface comedian. The sketch that he wrote and performed was so funny the Okeh record label recorded it and him.

According to Wikipedia, “it was through blackface minstrelsy that African American performers first entered the mainstream of American show business. Blackface served as a springboard for hundreds of artists and entertainers—black and white—many of whom later would go on to find work in other performance traditions. White audiences in the 19th Century wouldn’t accept real black entertainers on stage unless they performed in blackface makeup. blackface in vaudeville also provided opportunities for Blacks who performed in blackface. From the early 1930s to the late 1940s, New York City’s famous Apollo Theater in Harlem featured skits in which almost all black male performers wore the blackface makeup and huge white painted lips, despite protests that it was degrading from the NAACP. The comics said they felt “naked” without it.”

Eddie’s rise to stardom included not just his talent but his willingness to take the difficult road ahead of him. He climbed the ladder from the bottom rung to success. And he did it well. He became successful because whatever he did he did it the best way he knew how. He was an Actor.

Eddie’s career choice led to a very successful life. Once he appeared in the first public television broadcast as that Harlem Funster, Eddie Green along with his partner George Wiltshire (the first two Black men to appear on television in 1936), his career shot up from there. you can buy the book to read about the rest.

Suffice it to say that by 1948 Eddie was doing swell, the next photo is Eddie from an article announcing his fifth movie, Mr. Adam’s Bomb and my mom, the former Norma Amato, aspiring opera star who married Eddie in 1945.

On June 26, 1948 there was an article in the New York Age newspaper about my father and his thoughts on television:

Eddie Greens Firm Aids Show Business Through Television. The fast growing field of television offers a fertile one for Negro performers, is the opinion of radio comedian, Eddie Green, who revealed that because of this fact his motion picture firm has interested advertising agencies in having their sponsors products sold to the millions who view television via the singing and dancing route.
Designed to catch and hold the attention of the millions who want entertainment on video, Green asserted that instead of the hackneyed manner of selling national consumer goods to the public, his firm will “Deliver the message in a way to keep viewers from turning the dial”. Organized two months ago in Los Angeles with the famed comedian as president, Sepia Productions has already lined up five three-minute skits which they plan to lease or sell outright to ad agencies.
Backstage at the Strand Theatre here, where he’s a member of the “Duffy’s Tavern” radio show,  Green said that colored performers have their niche in the television picture and they should demand that their agents establish contacts with those that handle the shows in order not to be left out in the cold when the infant industry attains maturity. He pointed out that the decline of vaudeville witnessed many good Negro acts going out of business and little hope for the birth of new talent was anticipated until television offered vast potentialities.

I hope to be able to create a more optimistic view of our pioneers efforts and achievements from back in the day and how they benefit us today. This may be a long shot, but I want to make their achievements “cool”. As in “yea, that’s cool”. And then if my book were a CD there’s got to be enough optimists out there to make it go platinum!!

Introducing Eddie Green and Dancers in “Connie’s Hot Chocolates”, in its fourth month at the Hudson Theater in New York, 1929.

When I was young, about ten years old, my mom told me that my father said that he had never performed in blackface.  The way she said it, sounded to me like she was saying, he would not stoop so low.  But, maybe, he told her he would never perform in blackface again, as he had already been there and done that, because clearly Eddie did perform in blackface as the above picture shows.  I found this picture while searching the net and I was shocked.  Like Mr. Fallon says, I was like “Eww!”  Which is where my mindset was about this type of performing.  Whether it stems from societal influences or parental influences, I realized, at that time, that I was embarrassed for Eddie.  And, I did not know how I was going to be able to present this to the public.

Hm.  Obviously, I had a problem.  One minute I am so proud of my father and the next I want to hide a portion of his life.  I had to take a good look into my thought processes.  I had to educate myself about the business of performing in blackface.  So I started reading.

I learned that George M. Cohan, young author and actor, who became famous, appeared in blackface in 1891. he played  in his father’s production of “The Molly Maguires”; and he was co-proprietor and part producer of Cohan and Harris’ Minstrels, the first performance of which was at the Apollo Theatre, Atlantic City, N. J., July 27, 1908.*

I learned the  by the 19th century, blacks were allowed to appear on stage with whites only if they wore blackface. They painted their lips white and their costumes were usually gaudy combinations of formal wear; swallowtail coats, striped trousers, and top hats.  I learned that Bert Williams popped up, and of course, became famous.   Mr. Williams was the most popular blackface comedians of his day,and, was also the highest-paid in 1912, working for Ziegfeld Follies after signing a 3-year contract for $62,400 or $1.5 million today.  ( Strausbaugh 2006, p. 136)  I learned that It was through blackface minstrelsy that African American performers first entered the mainstream of American show business.*

I went back to some of the articles I have found in which Eddie’s performances were reviewed.  In an article of Stage and Screen it says:  “Eddie Green, late star of “Plantation Days, as he was billed on the program, was also exceptionally good.  His was a blackface number, dancing and singing and his droll manner won fave.  His talking song “Previous” was enjoyed.  He also did some clever dancing.”  The Utica Herald says “Eddie Green scores a hit with his softshoe dancing.”  A blurb in The Billboard from 1921 says,  Eddie “Simp” (his nickname to those who knew and loved him) Green, the acrobatic dancer is singing his own songs with “The Girls De Looks” Burlesque Show.  Eddie is a good business man and has his own publishing business. . . . He is contracted with the show for the next two years.”

Today, my personal perception of Eddie’s life as a performer has changed drastically.  My father was not degrading himself by doing blackface, he was presenting himself as the actor that he was in the makeup expected for the roles he played.  He had a plan.  He knew where he was going and what it was going to take to get there.  What to some was disgraceful, provided Eddie with a stepping stone to a better life.  He constantly received kudos.  I discovered new information from these articles, also.  Mom never told me that Eddie was an acrobatic dancer?  A softshoe dancer?  Really.  Eddie was exceptionally good at whatever he put his hand to.  That is the point.

Eddie wrote a letter to The Billboard in 1920 to let his fellow actors know about the most convenient place to get a room, the Hotel Francis, opposite the New York City Depot.  The editor of The Billboard had this to say about that letter:  “The following letter from Eddie (Simp) Green. . . . is beyond doubt the most unselfish communication that has come to us since the department has started, . . . Eddie Green writes something besides letters.  He wrote “A Good Man is Hard To Find”, “Algiers”, and the “Blind Man’s Blues.  He also has written himself into a class of regular fellows with the above letter.”

A class of regular fellows.  A good man.  A man of many talents.  My father, of whom I am proud.

p.s. I forgot to mention, is he surrounded by beautiful women, or what?