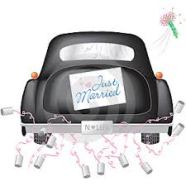 Eddie Green Takes Bride – LOS ANGELES – Coming as a pleasant surprise to even his closest friends, Eddie Green, former New Yorker and one of the Nation’s top-flight comedians, and a member of “Duffy’s Tavern” radio show eloped with attractive Norma Amato, concert vocalist, last Wednesday.  The couple were married at Yuma, Arizona, where they spent a brief honeymoon before motoring back to Los Angeles.

I have finally sent $27.00 to Yuma so that they can, hopefully, find the marriage certificate for Eddie and my mom.  I really spent too much time trying to find this document on-line.  Not all states have the same rules and laws about who can get what and how to go about doing it, but I have now gained a bit of knowledge in this area.  I also  used up a lot of time because I  found a different article that said Eddie and mom had eloped to Las Vegas.

I found a picture of Yuma from 1945, with a car driving through town.  Mom and Eddie had a Buick that Eddie has equipped with a ham radio.  I can see them now, he with a big smile on his face and mom’s scarf billowing out the window.  Back in the day, this was the place to which everyone eloped.

Here is the happy couple as they looked in about 1943 before they got married.  Unfortunately, Mom lost 98% of her early family pictures and documents in a fire so, to my knowledge, there are no wedding photos to show you.

During the past almost five years, I have been using a smartphone and a desktop computer that used to belong to my mom, but in order to write a book, I needed to update, so this past week I bought my first laptop with all the bells and whistles.  It’s taking a while to get used to working with the laptop, but I am doing it.  Catching up with technology.  Sharing with you and working on a book.  Good stuff.  I hope to have samples of chapters from the book, soon.  Thanks for stopping by, and I am leaving you with a picture of my mom, from about 2007 (she passed in 2010 and I still miss her).  We were at the Hollywood Bowl where she used to volunteer in the Gift Shop.  Wasn’t she cute?  Haha, I just remembered, her password for her computer was “cutie”, cause a guy in the computer store told her she was cute.  See ya!

10 thoughts on “EDDIE and MOM Get Married”