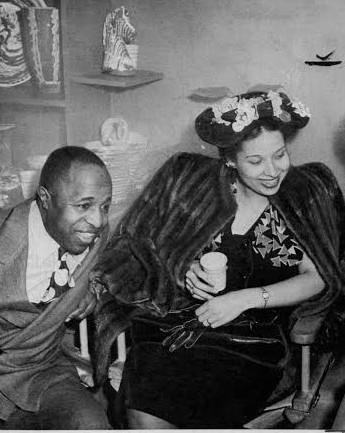 This is my father, Eddie Green and my mom, Norma, in about 1945-46.  Progress had been made in Eddie’s life, as you can see by looking at that coat around mom’s shoulders.  As I have mentioned before on this blog, Eddie did not start out with a lot of money.  As a matter of fact, when Eddie left home at nine years of age he didn’t have any money.  But he must of had a plan (excuse my English).  Because he wound up quite well-known in the entertainment industry, and at one time, had a lot of money. When Eddie left home, He intended to progress.

Home in 1891 (when Eddie was born) was Baltimore.  According to an old report from the  Johns Hopkins Hospital, which was in the area where Eddie lived: Typhoid fever was then very prevalent in Baltimore, especially in the city’s outlying areas. Drinking water was obtained from public pumps connected to shallow wells, now mostly contaminated by the myriad of privies and cesspools located in backyards. Mortality from typhoid fever in the city during the years 1888-1892 averaged around 229 cases per year, disproportionately affecting poor Blacks.  Things were not much better until after a 1904 fire that devastated a large portion of the city.  After the fire, progress began in regard to the sewer issues.

By 1917, Eddie had progressed in regard to recognition when he wrote his first song: “A Good Man Is Hard To Find,” Words & Music by Eddie Green, which was recorded over the years by various artists, including Brenda Lee in 1967.

As a Black man making his way through the early 1900s, Eddie’s progress was steady, benefiting himself, those with whom he worked, his family and those who came after him.  His progress was a good thing.

I read somewhere the other day  that in some ways progress may not always seem good.  For instance, when I was little, I loved to play Tiddly-winks:

Or take cars, we started out with what we now think of as funny looking, A Model-T:

Thanks to progress, we now have all sorts of car models.  We have electric cars and self-driving cars:

My point is, progress is about persevering and moving forward. I applaud my father for doing so, but, man, I really think little kids are missing something if they never play Tiddly-winks.