I have been invited to be a guest on a radio program in December.  They say there is a first time for everything, well, this is a first for me.  This was not something I expected, and I am a bit anxious, however, I am Eddie Green’s daughter and Eddie was a star of stage, radio and screen, so why be anxious?  After all, there was also a first time for Eddie.

Eddie was doing a show on Broadway “Hot Chocolates” in 1929, when he was asked to join the cast of a radio program that was being broadcast to Commander Byrd in Little America in the Antarctic.  According to The Brooklyn Eagle,  “The whole town was talking about Eddie Green. . . . ” because evidently Eddie’s skit was side-splitting. He joined the program, which was broadcast to all listeners in the United States as well as on two short-wave channels.

Of course, I am not half as funny as my father, nor am I as well-known, but here I am following in his footsteps, on the radio, an Old Time Radio program, at that.  I am being interviewed in regard to what I am trying to do to preserve the history of my father’s life.  I feel honored to be able to do the interview.   I started this project with a focus on my immediate family, but as I began to uncover the many achievements of my father, who started with nothing, I realized Eddie’s story could serve as inspiration to a wider population of people facing a variety of obstacles, and what could be better than an audience of radio listeners.  I’m in seventh Heaven.

Yesterday, November 14, I attended my first writer’s convention of Old Time Radio (OTR) fans.  Basically, I went because a writer friend was putting on a presentation that included information on my father, Eddie Green.  My friend surprised me by introducing me and suggesting that people get my card (I will have another post on how I almost did not have any cards) in case they could help me with my research for the book I am writing about my father. After the presentation, I was invited to participate in a future interview on an internet radio program!  Talk about being blown away (of course I didn’t show it).  It was just the boost I needed.

My father, Eddie Green, was the man who coined the term and wrote the song “A Good Man Is Hard To Find” in 1917.  He was 21 years old (supposedly).  He had come from an extremely poor background in Baltimore where he was born in 1896 or 1891 depending on which documents I have uncovered.  Though he became a well-known entertainer and entrepreneur from the east to the west coast, he has since faded into obscurity.  Some people do, however, remember Eddie from his ten year career as “Eddie, the Waiter” on the “Duffy’s Tavern” radio program from which he retired due to ill health in 1950.  The book about my father is to, hopefully, inspire others to the pursuit of achievement despite obstacles. 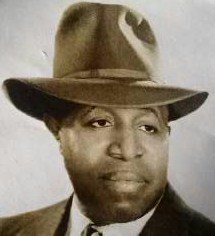