Hello friends. The fact that I have begun the process of writing a book about The Jeffersons tv sitcom is beginning to make it clear just how diligent I am going to have to be in getting my facts straight. Somehow it seems a lot more involved than corroborating the information I learned about my father when writing his biography. In researching the actors and their participation in their various shows, I have found out that one person will say what they think things were like, some will say what they heard, and some will assume. Getting the actor’s stories in their own words is difficult, especially if those actors are no longer with us.

The three actors pictured, Sherman Hemsley, Isabel Sanford and Mike Evans have all died. Sherman in 2012, Isabel in 2004 and Mike in 2006. Sharing this writing process here on WordPress is so important in helping me with this book-writing learning experience. I am not using this forum to write the book from the beginning but to have some kind of clarity of where I am going. 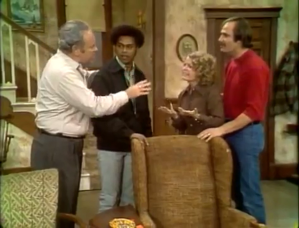 Today I decided to write about actor Mike Evans who played the character Lionel Jefferson, the son of the Bunker’s new Black neighbors. The Bunkers were the family from “All In The Family” or AITF, with Carroll O’Conner, as Archie and Jean Stapleton, as Edith. Mike Evans began portraying Lionel in this AITF in 1971 through 1975 before moving on up to “The Jeffersons”.

As a child, Mike was “short, and fat, and funny-looking”. His parents divorced when he was a baby. As a young man he used his talent for art by making sculptures out of clothes hangers and selling them to hippies in Hollywood. By 18 he had enrolled in City College and was studying Psychology, then switched to an Acting major. He learned one day that a studio was looking for young, Black actors and so he went to audition and eventually got the part of Lionel. The one downside to this was that his father had died 3 months earlier so Mike was not able to share this with him.

In 1975 AITF produced the spin-off The Jeffersons and Mike continued to play his character. But after one season, Mike left the sitcom. According to The Las Vegas Sun-TV Scene. Sunday, February 20, 1977: He left because he “wasn’t having a good time on the show.” He did, however, return for the sixth through the eighth season. Mike had married in 1976 and his marriage lasted until 2002 when his wife died. Mike would die of throat cancer in 2006.

There is such an upside to writing this type of non-fiction book. The actors, writers, producers that I am able to be in contact with are given a boost just knowing that people are actually interested in them as artists and still remember them. And the relatives of those who have left us are pleased, also. They’ve told me so, and I can hear it in their voices.

I thank you so much for stopping by and for “clicking” on my posts.