This photo absolutely suits my mood in regard to Memorial Day. I would probably rather “celebrate” Veteran’s Day seeing as I intended to write a post about my father, Eddie Green, and his experience as an African American who enlisted in WWI. Then it dawned on me that Eddie was not one who died in service. I was going to talk about how Eddie was working in a theater in Philadelphia before winding up at a Chicago Training Camp. I wanted to add information about how African Americans had to tear off a piece of their Registration Card to signify their race. After I realized I needed to re-direct my idea for a post, I stumbled across an article in the Pennsylvania York Daily Record newspaper. The article was posted on this date May 27, 2018 earlier in the morning. So I have chosen to share this information instead, as it will do nicely to get my point across. 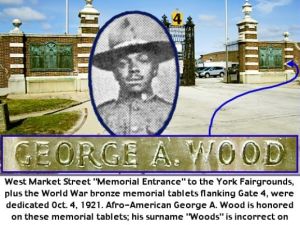 It seems to me that we don’t really hear enough about our Black soldiers who died defending this country. But while they were serving we sure made it clear they were not White. Even though they too died. Has anything changed? 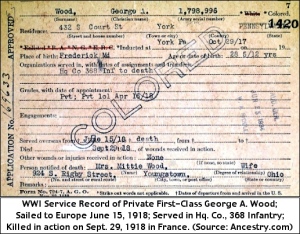 Thanx, for stopping by.

And thank you Stephen H. Smith; York Daily Record for allowing sharing of your research efforts.