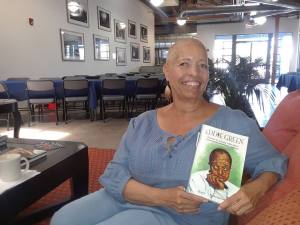 Ok, so here I was a short while ago, ready to go into a radio sound-proof booth to be interviewed by Mr. John L. Hanson of the NPR radio program In Black America. An honor. Well, for your listening enjoyment you can click on this link he sent me and listen for yourself (my daughter says I sound so good over the air.)  http://kut.org/post/elva-diane-green-her-father-eddie-green-pioneering-black-filmmaker-and-songwriter.

I was a bit nervous but once I started talking I was ok. I have interviewed before on Yesterday USA and on podcasts, so I am getting better. For people newer to my blog, when I began writing this book being interviewed was the last thing I thought about. Even calling myself an “author” wasn’t a necessity. I simply wanted to get the book out there so that it could inspire others and so Eddie could receive the acknowledgement he deserves as an entertainment pioneer. It dawned on me after the book was published that I, the author, the birther of the book now had to spread the word so people would find and read the book. Not just that, I had to let people know who I am. Elva Diane Green looks good on the cover but it does not make me a recognized author. So began the next leg of my writing journey. Promotion.

I am rather introverted. Unless I think I have some information you need to fix your life. You know, I am good at giving advice whether you ask for it or not. But normally I am not the one to walk up and shake your hand and introduce myself and exchange pleasantries. No. So for me to be an “author” who has written and published a book is something I have had to grow into. For instance, my publisher’s “writer’s guide” says: Hand your cards out everywhere, put them on people’s windshields, leave them at libraries, give them to everyone you meet or pass in the market. Unfortunately, half of the time I forget I even have cards. Cards that I spent time making up. Cards that I spent money on. So I have had to leave my cards out where I can see them at all times, stuff them in my pockets so they will make me uncomfortable.

Anywho, the fact that I started this writing journey using WP as a place to express myself has been one of the best ideas I have had. The fact that I have gained a following of supportive, interested, friendly people has absolutely helped me stay on track. (tears!). I now have an Amazon Author Page that will increase my reach. I tweet (but twitter is more radical than I really like), I have a Facebook Page for the book and a Facebook Page for me and the book.

And I have my father, Eddie Green as an example of how to get things done. When he wanted to get somewhere, he did. In his words: “It was during the year 1929. I was living in New York and trying every kind of theatrical job that was available. I had already played all kinds of Vaudeville, Burlesque, musical comedy and a few small radio programs “In the meantime, I was so busy working here and there and doing a bit of writing on the side that I did not notice my own advancement.” When Eddie wanted to open his own movie studio he did: From the local newspaper “Upon returning to the West Coast, Eddie announced the opening of his new film company, Sepia Productions, Inc., with himself as President.”

So, onward and upward. Thanks so much for stopping by.