So, tonight’s the night for the 2015 Oscar Awards.  I am not a big award show watcher, but since I am sans cable, I have not been able to watch TV, and now, of course, I am wishing I had cable again.  But, this means I have an excuse to skip ahead of myself regarding the telling of my father’s story, and also to touch on one of the reasons I am bringing him back into the spotlight. 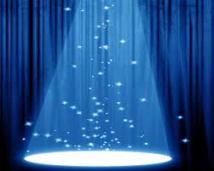 Eddie’s life in the entertainment world included singing, dancing, songwriting, comedy, magic, acting, producing and directing.  As an entrepreneur, he was a music publisher and owned two BarBQ Restaurants in New York and a Music School.    His name was always in the paper.  Even if he was just in town for the weekend.  He knew lots of people.  And lots of well-known people knew Eddie.  If I mentioned these people today, you would know who they were.  But, if I mention Eddie Green, almost nobody knows who he was.  It’s the opposite of that old joke that my step-father used to tell about the guy that everybody knows:

Bob tells his boss he knows everyone, even the Pope.  His boss doesn’t believe him.So off they fly to Rome. Bob and his boss are assembled with the masses in Vatican Square when Bob says, “This will never work. I can’t catch the Pope’s eye among all these people. Tell you what, I know all the guards so let me just go upstairs and I’ll come out on the balcony with the Pope.” And he disappears into the crowd headed toward the Vatican.  Sure enough, half an hour later Bob emerges with the Pope on the balcony.  Bob returns and finds that his boss has had a heart attack, Bob asks his boss what happened and his boss said his heart just couldn’t take anymore when a guy in the crowd jostled him and said “Hey, there’s Bob, but who is that guy standin next to him!”

In Eddie’s case, it’s “Hey, I know those people, but who is that little short guy standing next to them?”  So, tonight, in keeping with the Oscar Night theme I am bringing out my Eddie Green/Hattie McDaniel picture:

I know, it’s very small, my transfer skills are not that great yet.  From left to right are my mom, Norma, Eddie, Louise Beavers, a friend, Hattie McDaniel and another friend.  I received this picture from my Godfather, Atty. Walter L. Gordon, who also donated it to the Los Angeles Public Library where it can be viewed in the photo database.  And, speaking of the Oscars, this picture was taken around the time Hattie won the Academy Award for Best Supporting Actress in “Gone With The Wind.”  Hattie McDaniel and Eddie had worked together on the radio in the 30s and they also worked together on a radio program during WWII on a show called Jubilee.  Presented by the War Department, Jubilee was broadcast to American fighting men and women overseas and featured a mostly Black cast, including appearances by Louie Armstrong, Eddie “Rochester” Anderson, Nat King Cole, and Heavyweight champion Joe Louis.  You recognize these names, right?  I want the name, Eddie Green to be just as recognizable.

My mother, at the time, was a protege of Hattie McDaniel, as per this article from the The California Eagle, June 22, 1944: 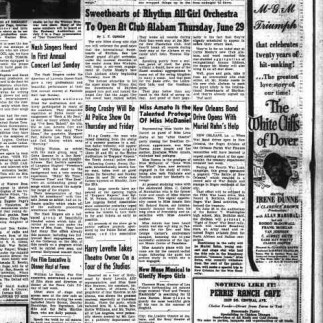 The article in the middle of the paper, reads:  “Miss Amato Is The Talented Protege of Miss McDaniel – Representing Miss Hattie McDaniel as a guest of Miss Lena Horne at her “after theater” party closing her headline Orpheum appearance, was Miss Norma Anne Amato and her mother Mrs. Sinclaire White Amato. . . .”  This is the type of information my mother never mentioned.  Well, actually, she did tell me, but not my siblings, that her family knew Hattie McDaniel, but she left out the protege part.  She also left out the Lena Horne part.  As a matter of fact, it’s pictures and articles like these that have filled in my mother’s and my father’s life for me.  This was meant to be.

Well, it’s been fun, but I gotta run.  I hope you have enjoyed tonight’s mini Oscar award/tribute show.  I enjoyed bringing it to you.  Tune in again.

In searching the net, I found a husband and wife who were in the process of selling their business.  They had copies of old radio programs, on CD, that Eddie had done for the Armed Forces Radio Program-Jubilee, that I mentioned above.  The Mrs. sent me five CDs, one with EDDIE GREEN (LIVE EXCERPTS) Comedy Routines (W/ Lena Horne; W/Canada Lee; W/Ernie Whitman) and another with 4 Comedy Routines (W/Hattie McDaniels; And/Ernie Whitman from 1942 and 1945, respectively.  Now if that wasn’t cool, I don’t know what is.