It’s not always easy to figure out how to begin a post. Especially if my brain wants to think about something else, like going to the store to buy cookies (I just discovered Biscoff Lotus cookies). Or if my brain simply doesn’t want to work at all. But since the pandemic has blown up again it’s good for me to sit here and share. Between this latest virus and the riots across the world I fear for us (people). It’s difficult to see a future of joy and happiness. However, I know that we, as human beings are capable of having such a future. In life today though it seems that Blacks still have to fight the hardest to be happy. It seems that more and more Black men are being shot by police. Can this change for the better? Judging by the past I think that it can, however, it will be a mighty long process. When my father was born, 1891 and as he performed as a comedian through the Southern states of America, Blacks were  being lynched on a constant basis.

As far as pandemics go, when he was a small child in East Baltimore he lived with typhus due to the fact that there was no sewage system, especially in the poor neighborhoods. By 1890 Baltimore Harbor was a national joke. While other cities in Europe and in the United States had installed sewers Baltimore had not. Outbreaks of cholera, typhoid or other diseases occurred fairly often. City code required indoor toilets, but it was up to individual property owners to build cesspools, cisterns, or gutters. These emptied into an unfortunate stream called the Jones Falls; its polluted course ran from the wealthier to the poorer areas of town and finally into the harbor. As Eddie’s family were desperately poor this was one reason he left home at nine years old-he wanted to find a better life for himself. 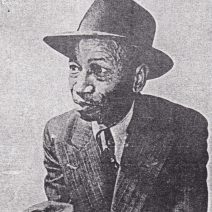 I have been asked to do an essay on a Mr. Perry Bradford. Perry was born in 1893. As a vaudeville performer and composer and songwriter, he too worked in theater circuits throughout the South and into the North. I imagine that he had the same worries as every other Black man in the South at that time. But he had a goal in mind. Bradford persevered in getting the recording industry to value recordings of African-American artists. In 1957, Little Richard had a hit with Bradford’s “Keep A-Knockin'”. In 1965 he wrote his autobiography Born With the Blues. Later in 1994 his song “Crazy Blues” was inducted into the Grammy Hall of Fame. Perry lived a long time, too. He died in 1970.

More recently, there was Arlando Smith, born 1952. Arlando came up during the Civil Rights era, police with hoses and dogs and batons. He worked at becoming successful. Arlando was a TV writer and director. During my research for my book on The Jeffersons I learned about this gentleman. He worked on What’s Happening Now, All In The Family, Silver Spoons, 227, The Richard Pryor Show, She’s The Sheriff, The Robert Guillaume Show. The Jeffersons (2 episodes) and Malcolm and Eddie. He was the stage manager for All in the Family, 51st Annual Academy Awards, The Richard Pryor Show, What’s Happening, Sanford and Son, That’s My Mama, Good Times, and The Jeffersons (48 episodes). In 2015 when Arlando Cooper Smith died The San Pedro Sun reported that: “Smith was an award-winning director who directed the first episode of La Isla Bonita Telenovela. He also contributed to several American television series, Arlando Cooper Smith made the Isla Bonita his home, has selflessly supported the island in ways too numerous to count for many years. He will be missed by all those who knew and loved him.”

These gentlemen became successful in their fields despite the Race issue, despite lynchings, typhus, and lack of money. Despite hard times. You don’t hear too much about these men. Until I wrote the book about my father few people knew of his many contributions to the entertainment industry. These men were either forgotten or overshadowed. Or simply not known about because of their positions in the background as opposed to being a principal character on a program. Because of who they were-their character-and because of their courage they achieved success, friendship and love.

May we all have courage.