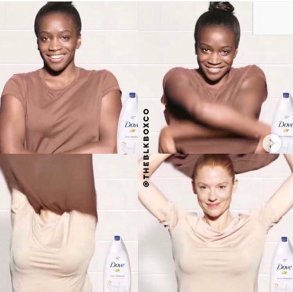 Going slightly off topic here today. Trending is a the subject of a Dove advertisement. Black people are not happy with this ad, on Twitter. There is a video that goes with the ad but at first all I saw was this picture. For the life of me I could not figure out why people were upset. I saw one Black woman in two shots and one White woman in two shots. Black woman before Dove and after Dove. White woman before Dove and after Dove. I thought it was a stupid ad. I stared at it for five minutes trying to figure out why folks were angry. Then I decided to look further and I found the video. And cracked up. The video shows the Black lady in the act of taking off her shirt and changing into a White woman. I laughed out loud because how Dove came up with this idea in this day and age shows how truly out of touch these people are. It’s laughable. Of course they may not see themselves as out of touch. Dove is an old company with perhaps old ideas, still. If they ever wanted to lose business this ought to do it. 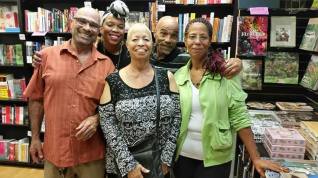 What I realized about myself, though, is that the ad did not make me angry. At first I didn’t even get it. I was clueless. When I did get it I still was not angry, just shocked that their ad department thought it up. I realize that I do not react angrily at seemingly racist episodes. As a Black woman I am not constantly seeing racism. Or Black and White. I see people. And being a light-skinned Black person has meant that I experience rude remarks from other Black people. Some call me High-Yellow as in “Oh you high-yellow, you’re too good to speak too me!”. So I got used to it and got over it. I’m just me. Living life. Sometimes struggling and sometimes not, just like a million other people. Besides, one look at the members of my family shows you we represent every skin color, so we fit in everywhere. This picture is my brother (Brad), my niece (from my late brother’s (Lance) first wife, me, my brother (Brian) and my daughter (Melony). Both of my brothers have had to fight over the fact that they look White. But we all look beautiful. Colorful. 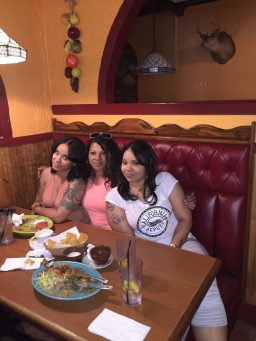 Here is my sister and her two daughters (Donna in the middle, Alex and Brittney). Everyone in the family used to tease Donna because she looked so different from us. Hispanic. Her dad even had a name for her that I cannot use in today’s world without backlash. All three of these ladies are beautiful, too. 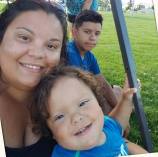 Here is my late brother’s daughter and grandsons from his second wife. So cute!! She sang on video at my Book Soup book signing. We all have issues, so I did not get to meet this part of my family until last year.

Ah, my cousin, Little Jim. Gone now. Did I have a major crush on him. He has beautiful grand-kids that unfortunately never met him. He was the family hero. Sharp dresser. Fine.

This is my new favorite. Kellan. My cousin Roddy’s grandson. Ain’t he cute!

In the 1940s my father was Eddie, the waiter on the radio program “Duffy’s Tavern”. This program was named to the Honor Roll of Race Relations  by the Schomburg Collection of Negro Literature for distinguished effort for improving race relations. Meaning Eddie, as the only Black actor on the show was not portrayed in a demeaning manner. He was on the show because he was good. When Eddie began making movies he used the best cameraman in the business because, he said, “there is a wide variety of skin colors and tints in the colored race”.

Well, there is a wide variety of skin colors and tints in the human race. I would like to believe that someday our focus on color will stem from the need to get just the right camera shot.

Thanx, for stopping by. Hug someone soon.

To purchase my book Eddie Green The Rise of an Early 1900s Black American Entertainment Pioneer:

"All the evidence that we have. . . indicates that it is reasonable to assume in practically every human being and certainly in almost every newborn baby, that there is an active will toward health, an impulse toward growth, or toward the actualization of human potentialities." ---Abraham H. Maslow
Join 944 other followers
Follow pininthetush on WordPress.com